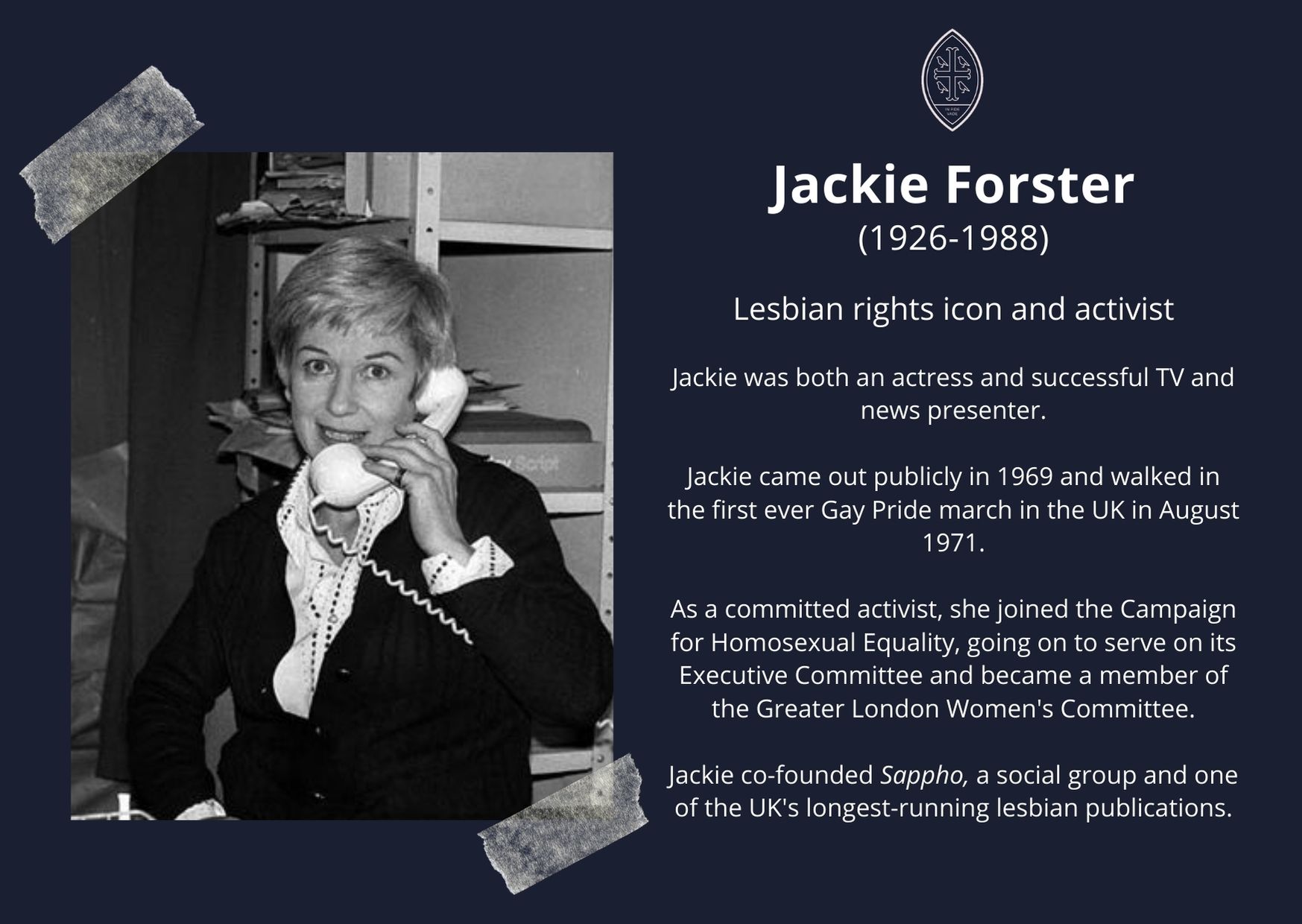 Successful news reporter and actress, Jackie Forster (1926-1998), became one of Britain’s leading lesbian rights activists in the 1960s, being famously known as a trailblazer for the LGBTQ+ community. Jackie’s courage in coming out during less enlightened times made her a role model to thousands.

At the age of six, Jackie travelled from her home in British India to attend Wycombe Abbey, as her father was a colonel in the Royal Army Medical Corps. After her educational career at the School, Jackie became an actress and later developed an incredibly successful career as a TV presenter and news reporter under her maiden name of Jacqueline Mackenzie. Jackie was known for her lively delivery and sharp wit, making her a TV favourite with producers and viewers alike. She went on to win the Prix d’Italia in 1956 for her coverage of Prince Rainier and Grace Kelly’s wedding.

In 1969, Jackie came out publicly and joined the Campaign for Homosexual Equality, she later served on its Executive Committee. As a committed activist, she walked proudly in the first-ever gay right’s march in the UK in 1971 and co-founded Sappho a year later – a social group and one of the UK’s longest-running lesbian publications. Following the success of Sappho, Jackie became a member of Greater London’s Women’s Committee. During her time as a committed activist, Jackie was known for notably campaigning to help lesbians become mothers through artificial insemination.

From 1992 until her death, Jackie was an active member of the Lesbian Archive and Information Centre Management Committee, and in 1997 a BBC film crew visited the archive to film a programme about her life, as part of The Day That Changed My Life documentary series.

In 2017, Google Doodle replaced its logo with a tribute to Jackie Forster on what would have been her 91st birthday. The illustration shows Jackie standing in front of a Venn diagram, in one circle was a newsroom and camera, in the other a gay rights march with campaigners holding ‘equality’ placards symbolising her two most important aspects of her life.

Wycombe Abbey is incredibly proud to have educated such a brilliant woman who helped pave the path for future generations, campaigning for equal rights and recognition of women internationally.