Success for Wycombe Abbey Pupils at the British Physics Olympiad 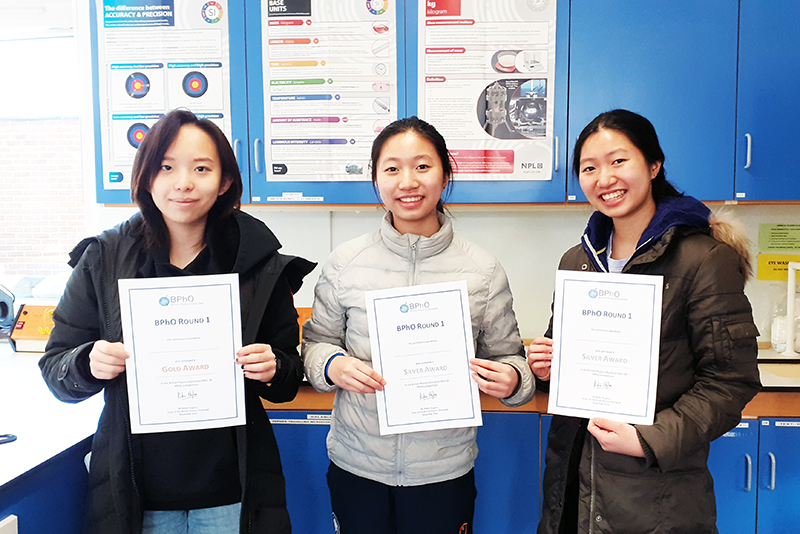 Many congratulations go to Rose, Nicola and Erica (UVI) who participated in the British Physics Olympiad recently. Nicola and Erica achieved Silver Awards and Rose achieved a Gold Award. These are exceptional results in what is an extremely challenging competition.

The British Physics Olympiad (BPhO) is to encourage the study of physics and to recognise excellence in young physicists through 10 annual physics competitions. Consisting of a gruelling three-hour question paper the Year 13 Olympiad competition is the pinnacle of the series and aimed at stretching the top physics pupils in their final year at school.

Read below Rose’s experience of the competition.

“Having finished the three-hour-long paper, I remember walking out of the classroom with the sides of my head throbbing. It started off with a few relatively standard A level mechanics questions but the paper then became progressively harder with some requiring an interdisciplinary approach, such as applying the sum to infinity of a geometric sequence into the calculation of the total resistance of a circuit. The questions also incorporated some very interesting physical scenarios which have never crossed my mind before. By analysing them mathematically using the different laws of physics, which I learnt in class, I was surprised by the innovative aspect of physics where one could devise various solutions to the same question.

By challenging both my mathematical ability and physical intuition, the Olympiad served as great preparation for my University of Cambridge interview, which required a similar set of skills and a strong focus on applicants’ thought processes, and not the answer.

I thoroughly enjoyed the challenge; it was a great opportunity to break free from A levels (where the correct answers are often the focus) and to celebrate the more creative and flexible side of science!

It was a great pleasure to be able to participate in the British Physics Olympiad Round One, and I would love to partake in more similar competitions or activities to challenge my academic ability even further.”