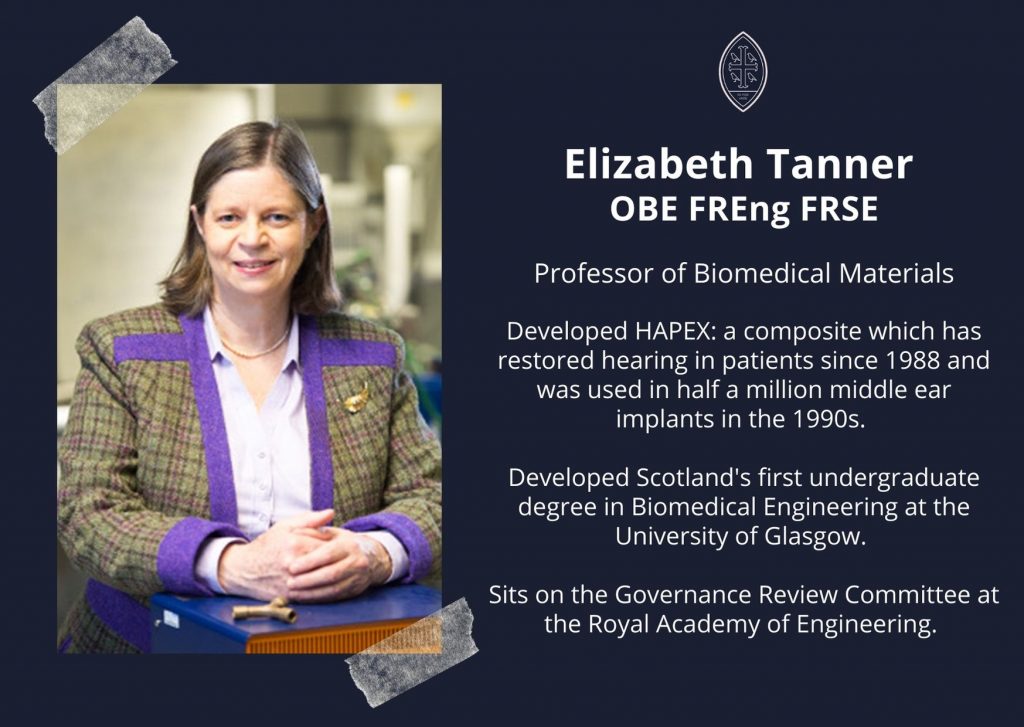 Elizabeth Tanner OBE FREng FRSE is the Bonfield Professor of Biomedical Materials at Queen Mary University of London. Elizabeth’s research focuses on developing materials with particular biological and mechanical properties for use in medicine, more specifically bone replacement. Elizabeth developed HAPEX, a bone mineral composite biomaterial which was used in over half a million middle ear transplants in the 1990s.

Elizabeth attended Wycombe Abbey from 1969-1975, completing A levels in Pure Maths, Applied Maths and Physics. After being encouraged by the Headmistress, Miss Fisher, to pursue Engineering, Elizabeth went on to study a bachelor’s degree at the University of Oxford: ‘I was at a girls’ school with a headmistress who thought that there was no reason that women should not do engineering and encouraged at least one girl a year to go to Oxbridge to do engineering.’

Elizabeth graduated from Oxford in 1979, and then achieved a Doctor of Philosophy in Engineering Science within the Oxford Orthopaedic Engineering Centre. She then went to join the Department of Materials at Queen Mary University of London in 1983, and in 1998 was appointed as Professor of Biomedical Materials. During her involvement within the department, her research focussed on materials for bone replacement and augmentation.

Elizabeth accredits one of her proudest moments in research to the development of HAPEX: ‘[HAPEX is] a composite made of bone mineral in polyethylene, which was used in about half a million middle ear implants in the 1990s – because of this work, people can hear.’ The HAPEX material has been used to restore hearing in patients since 1988.

In 1998, she joined the Department of Orthopaedics at Lund University Hospital (Sweden) as a visiting professor in biomechanics and biomaterials. During this time, she held a Hedda Anderson Adjunct Professorship and from 1998 – 2001 became the Associate Director of the IRC in Biomedical Materials and was the Dean of Engineering from 1999 – 2000. In 2007, she joined the University of Glasgow as Professor of Biomaterials.

In 2010, Elizabeth developed Scotland’s first undergraduate degree in Biomedical Engineering at the University of Glasgow. She ran the course for five years, with the first year’s intake of 23 students. This has now grown to more than 200, with graduates from the course working all around the world.

Beginning in 2016, Elizabeth led a two-year study to help babies with breathing difficulties by developing a biodegradable stent (a device which is inserted into a blood vessel or other internal duct to expand it to prevent or alleviate a blockage). In 2018 she returned to Queen Mary University of London as Bonfield Professor of Biomedical Materials.

Elizabeth has been a pioneer for current girls at Wycombe Abbey to study STEM subjects in higher education. This past year she has volunteered as an alumnae mentor for current Upper Sixth pupils, offering experience and advice within her field to support and encourage current pupils’ choices to study Materials Engineering and Biomedical Engineering to develop their future career paths.

Diversity and Inclusion at Wycombe Abbey