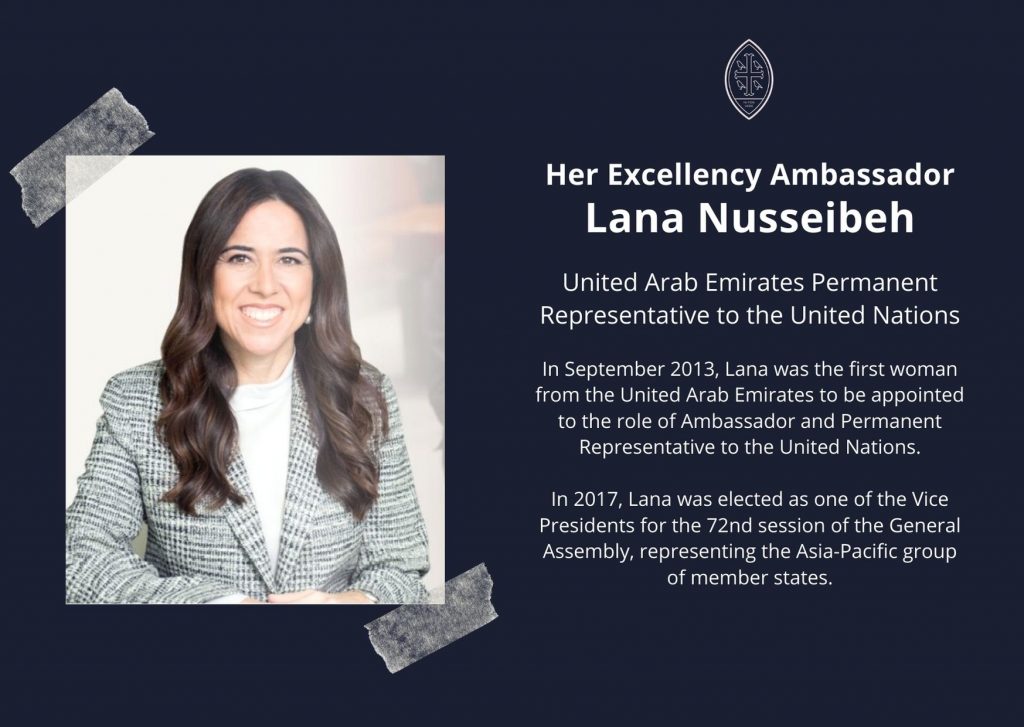 ‘I think boarding school is a place where you form your most intense friendships and learn how to communicate your feelings; there’s a genuine sense of having a shared experience that makes the conversations you have with friends and peers more meaningful. You grow up together.’

Her Excellency Lana Nusseibeh attended Wycombe Abbey from 1990-1997 (C204), went on to receive an MA (Cantab) and BA (Hons) in History at Queens’ College, Cambridge, and an MA with distinction in Israeli and Jewish Diaspora Studies from the School of Oriental and African Studies, University of London. In September 2013, Lana was the first woman from the United Arab Emirates to be appointed to the role of Ambassador and Permanent Representative to the United Nations.

In 2017, Lana was elected as one of the Vice Presidents for the 72nd session of the General Assembly, as well as President of the UN Women Executive Board. She served as co-chair of the Intergovernmental Negotiations on Security Council Reform for three sessions of the UN General Assembly from 2017 to 2020 and is co-chair of the Friends of the Future of the UN, alongside the Ambassador and Permanent Representative of the United Kingdom. When asked what Wycombe Abbey means to her and how her education has helped shape her career, Lana responded:

‘Wycombe Abbey was a formative part of my development. I am deeply grateful for the opportunities the school afforded me, and attribute many of my roles and accomplishments to my experiences there. Specifically, the school promoted critical thinking, as well as a rigorous and academic approach to every subject, from literature to history to the scriptures and sciences. I was able to learn under brilliant teachers who were fully committed to helping each girl achieve her full potential, thrive in their chosen subjects, and develop a curiosity and passion for learning.’