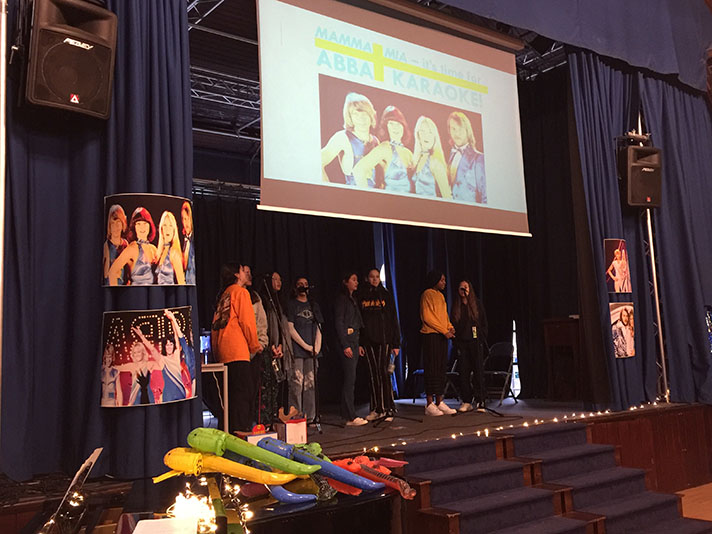 The end of January saw a particularly cold blast of weather hit High Wycombe, but inside the walls of Wycombe Abbey we remained warm and energetic with a celebration for Scandinavian Week. Following the success of India Week last year, the intention of Scandinavian Week was to hold activities in and outside of lessons that would enable the girls to learn more about Scandinavian history, culture and society, and to provide some fun and relaxation for everyone. The week began with a Hygge Night in every House. Hygge is the Danish philosophy of cosiness, which was put into practice with games, blankets, hot chocolate, candles and some Swedish merriment in the form of Mamma Mia! Unfortunately, Tuesday’s visit from Dr Gareth Williams from the British Museum to speak about Vikings had to be postponed due to the weather, but on Wednesday we were delighted to welcome students from the Oxford University Scandinavian Society who gave presentations on Norway, Denmark, Sweden, Finland and Iceland. Their excellent talks were followed by a tasting of Scandinavian delicacies; it was a thumbs up for cinnamon buns and lingonberry cordial but a thumbs down for brown cheese and pickled herring. On Thursday we were honoured to host a lecture by Isabelle Charmantier on the renowned Swedish scientist Carl Linnaeus and his role in the development of taxonomy. This lecture revealed many surprising facts about Linnaeus, including his fascination with his pet racoon Sjupp and his disdain for having to reply to letters from other scientists. As the week drew to a close we were delighted that, despite the heavy snow, we could go ahead with our planned extravaganza of Whole School Scandinavian Singing. Hosted by Mr Tubb and Mr Ledingham, dressed as Benny and Bjorn, pupils and staff belted out some of ABBA’s greatest hits including Dancing Queen and Thank You For The Music; it really was joyous.

Throughout the week every department incorporated the Scandinavian theme into their lessons. This included replicating the Northern Lights in a conical flask during Chemistry and a Duplo bridge-building competition in Physics. Maths lessons saw the girls working in teams to make infographics on Scandinavian data and Psychology sessions examined the effects of Seasonal Affected Disorder. The Art and History of Art Departments explored the works of Edvard Munch and other Scandinavian artists and in Drama girls re-enacted the Hans Christian Anderson tales. In Sport girls were given the opportunity to try out Handball and other popular Scandinavian sports, as well as learn some basic Swedish and Norwegian in their Modern languages lessons.

We hope that all the girls learnt something from the week and have been inspired to find out more about our Nordic neighbours.