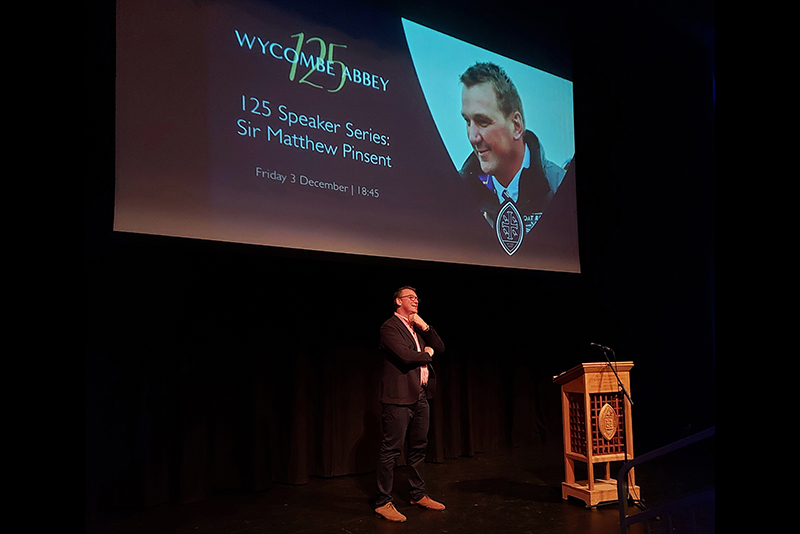 As part of our 125 celebrations, the School was fortunate to have Sir Matthew Pinsent, the four-time Olympic world champion as the second speaker in our 125 Speaker Series: Making A Difference. Matthew joined the Olympic team as one half of a pair with Sir Steve Redgrave, winning the World Championships in 1991 and the Olympics in 1992 – when Matthew was only 21 years old. Sir Pinsent gave a highly inspiring talk, taking the audience through the trials for the Olympic team, the intensity of his 2004 race in Athens, and his current role as a sports broadcaster.

Sir Matthew shared that he realised quite quickly what set him apart from others; the ability to switch between his academic and sports mindsets effectively. This advantage assisted him in training with the men’s team for the 1996 Olympics. Their coach outlined to the team the time they needed to aim for to ensure a 100% chance of winning. I was fascinated by this and it brought into perspective the high expectation of athletes in the Olympics and the rigorous training that is needed to succeed.

As part of the Olympic team, Sir Matthew took part in four races winning each of them: an incredible feat. The intensity of his last race in Athens 2004 was especially striking. Prior to the race, the team discussed a new call which they named the ‘final call’. This was to trigger the last sprint 30 strokes before the end of the race, significantly more than the usual 20. Sir Matthew narrated the tense environment of the push and pull race with Canada, and with a pencil width distance between first and second place, Team GB topped the podium winning gold.

Sir Matthew concluded the talk by discussing his new position as a sports broadcaster and the difficulty with balancing consent from tired athletes to having a genuine story. I was particularly gripped by his anecdote about interviewing an Olympic archer immediately after placing fourth. Matthew asked the athlete for an interview and during the 30-second countdown for them to go live he reasserted, “Are you sure you want to do this?”. Clutching a bar with white knuckles and close to tears, the archer replied, “let’s do this”.

The audience very much appreciated the opportunity to ask Sir Matthew their questions and he was generous enough to pass around his collection of medals. On behalf of Wycombe Abbey, I would like to sincerely thank Sir Matthew Pinsent for taking the time to talk to us.