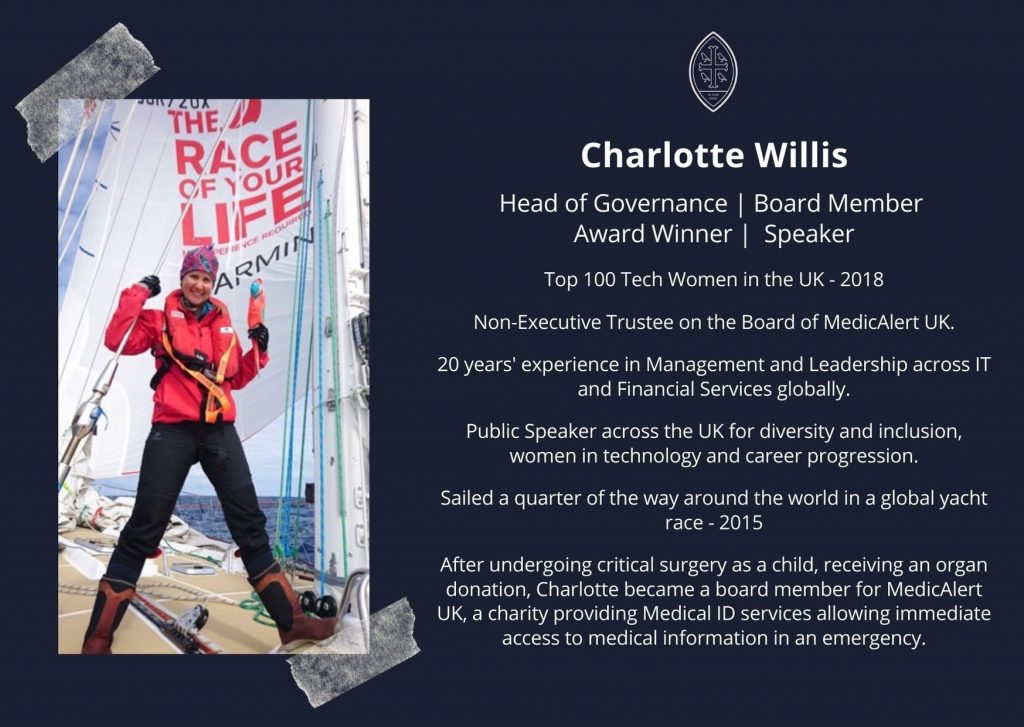 Named as one of the top 100 tech women in the UK in 2018, and a Trustee of MedicAlert UK, Senior Charlotte Willis continues to advocate for diversity and inclusion, women in technology, and career progression by speaking publicly about these topics across the UK.

After undergoing critical surgery as a child and receiving an organ donation for a kidney transplant, Charlotte’s personal journey led her to become a board member for MedicAlert UK, a charity providing Medical ID services which provides immediate access to an individual’s medical information in an emergency.

Shortly after Charlotte joined Wycombe Abbey in UIII, she was unexpectedly diagnosed with end stage renal failure after a routine blood test, being told she probably had only two weeks left to live.

‘My only option was a kidney transplant. I was admitted to Great Ormond Street Hospital, started dialysis and was put on the organ donor register. At that time (1990), I was told that the average wait for a kidney for a child was approximately a year, but incredibly a suitable match came up only six weeks later and the transplant went ahead. It was a donor kidney from a similarly aged child who had tragically died in a car crash and the brave parents had made the heart-breaking decision to donate his organs. I never knew who they were as they chose to remain anonymous but I am forever indebted to them for that choice they made as it saved my life.’

Charlotte was able to re-join School, become Head of House, learn Cantonese in Hong Kong on a gap year, graduate from university, travel the Trans-Siberian railway, forge a successful career (Currently as Head of Governance in Technology at Schroders), be recognised as one of the top 100 women in technology in the UK, sail a quarter of the way around the world in a global yacht race in 2015, run the London marathon and Triathlon, and travel to 57 countries around the world. All of this had only been possible for Charlotte because she was given a second chance at life whilst at School.

’To look at me you’d never know that I’ve had a kidney transplant, so similar to someone with an allergy, or on medication, or with another hidden condition, it’s very much ‘invisible’ from the outside. After my surgery, my parents recognised that my being away at school and wanting to travel and explore as I got older meant that there might be a need for my medical information to be available in the event of an emergency. So, they sought support from MedicAlert UK, the UK’s original and only charity providing reassurance and peace of mind through Medical ID services to members. I became a member when I was 17 as I began to plan my gap year abroad and I started to wear a bracelet with a small disc on it, containing my MedicAlert UK membership and phone number, meaning that if I were ever unable to speak for myself and needed medical attention, first responders and medical professionals could call MedicAlert UK from anywhere in the world and quickly gain access to those vitally important details which could be life-saving. MedicAlert UK is unique from commercial medical ID services by having medical nurses on staff to verify medical information, as well as a global 24×7 emergency line available in over 100 languages and dialects.’

Charlotte jumped at the chance to become a Non-Executive Trustee on the MedicAlert UK Board after her experiences. Four years later she now sits on the IT Committee and as Chair of the Governance Committee. In the last few years, the charity has launched MedicAlert UK Protection Projects and a Goodwill Fund to provide its membership services to those that can’t afford them.

’I now own a few MedicAlert UK IDs which I interchange to suit my lifestyle whether I’m in the office or out at sea. The very selfless and courageous act of organ donation saved my life when I was 12 years old, and MedicAlert UK provides the peace of mind for me to live that life to the full.’

How can Wycombe Abbey parents and girls support MedicAlert UK?

As a Registered Charity, MedicAlert UK relies entirely on donations to be able to fund its charitable projects. Donate by visiting our Just Giving page or search Wycombe Abbey – supporting MedicAlert UK.

If you or someone you know is interested in becoming a member, sign up on their website: MedicAlert UK, using the special Wycombe Abbey School code: WASMA