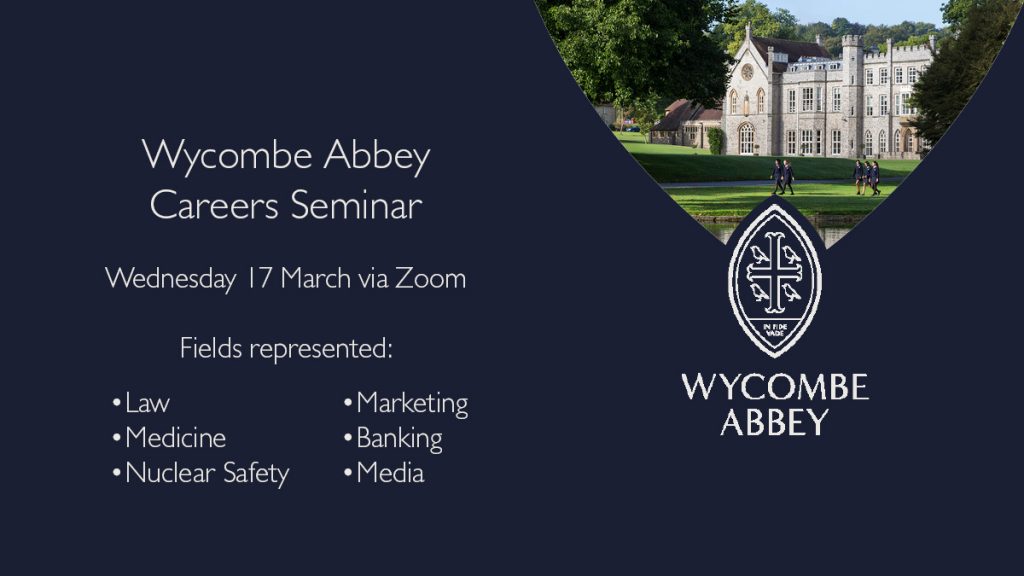 The Wycombe Abbey Careers Seminar is an annual event that is open to all UV – UVI pupils. This year, hosted on Zoom due to lockdown, we were joined by 15 speakers from our alumnae and parent community. Their brief was to share their career experience with the girls covering how they got there, the inevitable challenges along the way, and the highs and lows of their day-to-day work. There was a wide variety of fields represented including law, medicine, nuclear safety, marketing, banking and media and we were also joined by two entrepreneurs. Pupils chose to hear from two speakers during the course of the evening.

We are so grateful to all the speakers for giving up their time and for answering the pupils’ questions.

Read below for some feedback from pupils about the event.

Poppy’s interests in the subject have led her to pursue an inspiring path in the industry. As a current A level Computer Science student, I found it to be a very interesting talk and learned that during her time at Wycombe Abbey she was not able to take this subject as an A level choice. Despite this, she had a passion for the subject and was interested in Game Development so went on to study Computer Science at Newcastle University. Her time at university was enjoyable and also helped her discover that she did not want a career directly based on programming such as Software Development. This pushed her to find a career that was still based on the field of Computer Science but one that is more focused on bridging the gap between Development and Operations – this is how she found her role at KPMG as a DevOps Engineer. After working there for a year, she was then promoted and is currently working as a Senior Engineer.

Poppy describes her work as perfect for her as it is technical and hands-on but with a holistic view letting her work on multiple different programming projects in parallel. She is constantly using different tools, Cloud providers, programming languages and is always learning on the job. It was interesting to hear her describe that no programming language is specifically needed but that understanding the structure of these languages is more important as this will allow you to easily learn new ones. Poppy also explains that surprisingly, the environment at her job is very diverse with co-workers of different genders and racial backgrounds; this was refreshing to hear as often we are told that the tech industry is very male-dominated but Poppy described the industry as constantly evolving.

The Careers Seminar always offers the unique opportunity to spotlight fascinating, and often uncommon, career paths, gaining insight into their daily operations and professional experiences. Having spent 16 years at the BBC, before becoming the Deputy Head of Newsgathering at Sky News, Sarah Whitehead is a seasoned pro in the journalism sphere. She kindly took the time to reflect upon her journey, explore the processes involved in collating the news stream and discuss how she developed her journalistic voice. In her role, Sarah is responsible for selecting the stories and articles that will be broadcasted around the world and thus she offered unparalleled insight into the dynamic nature of journalism and how her socio-political convictions and journalistic integrity intersect with the dissemination of objective news.

In addition to sharing about the specifics of her role, Sarah’s message was one of resilience. Undeterred by early rejections and unsuccessful job applications, she first conceptualised then spearheaded the production of Sky’s ‘Deep Ocean Live’, travelling hundreds of metres below the Indian Ocean – a world first – to reflect upon the untold story of the deep ocean. As Wycombe girls, our ambitions fly sky-high, and hearing how Sarah persevered and carved her role in a constantly changing field was hugely inspiring. Hailing from the humble halls of Butler, Sarah’s professional and personal journey inspired us to reflect upon how resilience and commitment ensured her success, and how with a similar mindset, we too could succeed wherever our passions may lead.

Sarah’s role has enabled her to travel around the world, simultaneously experiencing and reporting on a myriad of news stories. Indeed, her interest in environmentalism has led to her current management of Sky’s coverage of the United Nations Climate Change Conference (COP), spotlighting discussions that may well alter the discussion about climate and the future of green technology in a dramatic way. Journalism is constantly changing, especially in light of the widespread consumption of social media, and Sarah’s commitment to crafting the best story, rather than simply breaking the story first, is truly inspiring. In a time where media scepticism is at its highest, Sarah is tasked with informing the world and elevating the voices and concerns of the global community, a critical role. We were all so privileged to hear her story and bombarded her with questions about how the news travels from the source to our palms.

In my first seminar, Dr Tang outlined the major milestones of her highly impressive career as a consultant surgeon in her 30s. What stood out about her seminar was not only how patiently she clarified each step of her career pathway, but also how able she was to empathise with the characteristic uncertainty that many of us face as aspiring medics. What was particularly comforting was how she rationalised the decisions she made throughout her career – when she expressed that her choices of university, college and specialty simply emerged from memorable first impressions, lifestyle preferences and general intuition, it dismantled the misconception that all medical professionals make ultra-calculated decisions about their careers. For me, the highlight of this seminar was her response to a question I asked about the obstacles that female doctors of ethnic Chinese descent encounter, to which she drew upon her own personal experiences to present a brutally realistic depiction of the NHS.

Dr Bakare’s seminar held a slightly different focus; aside from her intense passion for her practice, Dr Bakare gave immensely valuable advice about how to juggle the demands of an NHS career with extra-occupational interests and family life. As an enthusiastically loyal Bristol alumnus, her overwhelmingly positive account of her traditional course and intercalated year has inspired me to pursue a more scientific approach to my medical education. Her personal accounts of the rewards and challenges of working in ICU were heart-breakingly relevant considering the crippling effects that COVID-19 has had on the NHS – we are so used to seeing concrete statistics about the national response to the pandemic, thus it was so refreshing to hear how HCPs like Dr Bakare have been impacted on a day-to-day level.