The Black Heroes of Mathematics with Dr Nira Chamberlain 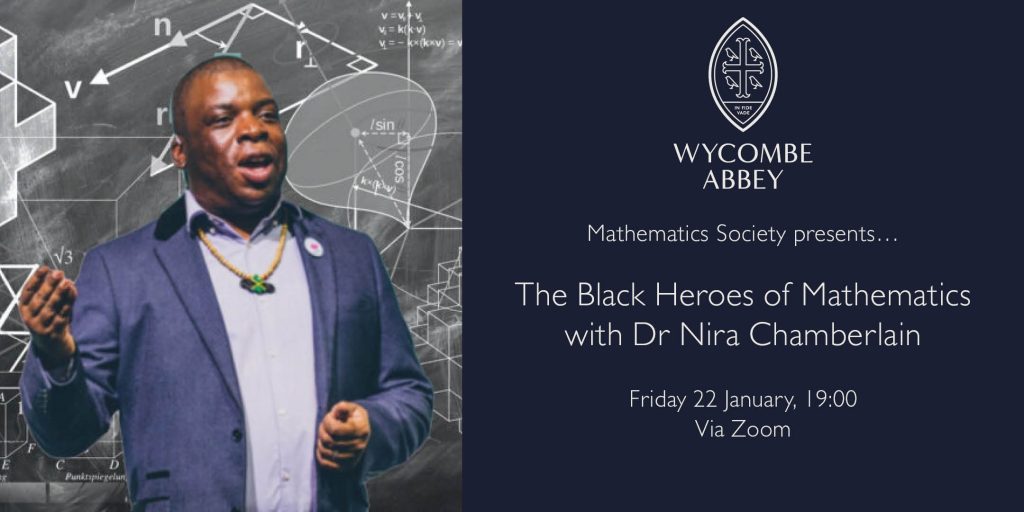 When Nira Chamberlain was at school his favourite subject was Mathematics, so when a teacher asked him what he wanted to do when he grew up, Nira replied that he wanted to be a Great Mathematician. His teacher replied that ‘well somebody of your physique should become a boxer…’ which, understandably, left the young Nira feeling upset. But when he spoke to his parents, who were Jamaican immigrants from the Windrush Generation, they reassured him that ‘You do not need anyone’s permission to be a Great Mathematician’.

This story was the starting point for Dr Chamberlain’s fascinating lecture on ‘The Black Heroes of Mathematics’ which was attended by pupils from Wycombe Abbey and Cressex Community School. The lecture cleverly interweaved songs, images and statistics to tell the story of Black mathematicians and scientists who have often been unfairly forgotten. It was easy to see why Dr Chamberlain won the accolade of the World’s Most Interesting Mathematician in 2018.

We learned about the NASA computer programmer Katherine Johnson whose calculations underpinned the successful lunar landing in 1969 and the slave Thomas Fuller, whose mathematical abilities helped inspire the abolitionist movement. However, just as inspiring as these stories, we also heard how Nira did indeed become a Great Mathematician working across a range of disciplines, for example, his models were used to design the HMS Queen Elizabeth, the 65,000 tonnes battleship that became the flagship of the Royal Navy. This work led him to become one of only a handful of scientists to be listed in Who’s Who and be named the President of the Institute of Mathematics in 2018 – the first Black person to be elected to this role.

The latter part of the talk described the outreach work that Dr Chamberlain and other Black mathematicians are doing to act as role models for the next generation. For instance, he described the work done by Dr Angela Tabiri in Ghana, founder of FemAfricaMaths, who works with schoolgirls and early career female mathematicians across Africa.

After the lecture, Dr Chamberlain was extremely generous with his time, answering numerous questions that came from the pupils and teachers. It was a truly fascinating and inspirational lecture, and I am sure that many pupils will have left feeling inspired by the stories that they heard.

For those who missed the lecture it is available here with the access Passcode: 9y8PF%^R